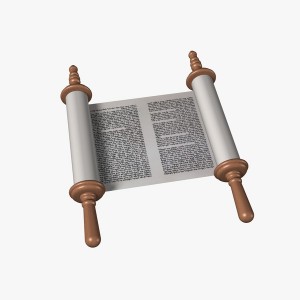 A Parasha (Hebrew: פָּרָשָׁה Pārāšâ “portion,” plural: parashot or parashiyot) formally means a section of a Biblical book in the Masoretic Text of the Tanach (Hebrew Bible).  In the Masoretic Text, Parasha sections are designated by various types of spacing between them, as found in Torah scrolls, scrolls of the books of Nevi’im (Prophets) or Ketuvim (Writings, especially Megillot), masoretic codices from the Middle Ages and printed editions of the masoretic text.

The division of the text into parashot for the Biblical books is independent of chapter and verse numbers, which are not part of the masoretic tradition. Parashot are not numbered, but some have special names.

The division of parashot found in the modern-day Torah scrolls of all Jewish communities is based upon the systematic list provided by Maimonides in Mishneh Torah, Laws of Tefillin, Mezuzah and Torah Scrolls, Chapter 8. Maimonides based his division of the parashot for the Torah on the Aleppo Codex.  The division of parashot for the books of Nevi’im and Ketuvimwas never completely standardized in printed Hebrew Bibles and handwritten scrolls, though important attempts were made to document it and create fixed rules.

A parasha break creates a textual pause, roughly analogous to a modern paragraph break.  Such a pause usually has one of the following purposes:

To decide exactly where a new topic or thought begins within a Biblical text involves a degree of subjectivity on the part of the reader. This subjective element may help explain differences amongst the various masoretic codices in some details of the section divisions (though their degree of conformity is high). It may also explain why certain verses which might seem like introductions to a new topic lack a section division, or why such divisions sometimes appear in places where no new topic seems indicated. For this reason, the parashah divisions may at times contribute to Biblical exegesis.

Parashot appear in manuscripts as early as the Dead Sea Scrolls, in which the division is generally similar to that found in the masoretic text.  The idea of spacing between portions, including the idea of “open” and “closed” portions, is mentioned in early midrashic literature and the Talmud. Early masoretic lists detailing the Babylonian tradition include systematic and detailed discussion of exactly where portions begin and which type they are.

As a group, Tiberian masoretic codices share similar but not identical parasha divisions throughout the Bible. Unlike the Babylonian mesorah, however, Tiberian masoretic notes never mention the parasha divisions or attempt to systematize them. This is related to the fact that the Babylonian lists are independent compositions, while the Tiberian notes are in the margins of the biblical text itself, which shows the parashot in a highly visible way.

In the centuries following the Tiberian mesorah, there were ever-increasing efforts to document and standardize the details of the parasha divisions, especially for the Torah, and even for Nevi’im and Ketuvim as time went on.