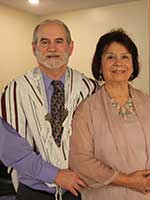 Rabbi Yossi Laster was born in 1956 in Chicago, Illinois of Jewish parents.  He was raised in a Reformed Jewish home and studied Hebrew in preparation for his Bar Mitzvah at age 13.  The Bar Mitzvah was supposed to mark his entry into religious adulthood and responsibility before God.  Sadly, it marked the end of any religious observance and a complete falling away from faith.

For the next 10 years he lived a secular life and had no desire for any religion whatsoever.  However, the Lord had other plans in mind.  While working at a military installation, the Lord put in Yossi’s path a spirit-filled dynamic Christian, who began to witness to him of the Jewish Messiah Jesus.  The constant witness of this Christian, by life, deeds, and words, eventually opened up Yossi to consideration of Jesus as the Jewish Messiah.

One Sunday, Yossi was invited to the Church of this Christian.  He had no idea that this would lead to a life changing experience.  At that service, in 1979, Yossi accepted Jesus as the Jewish Messiah and the Redeemer of his soul.  Yet, this Christianity was alien to his Jewish upbringing and it was difficult for him to feel comfortable as part of the community.

Again, the Lord intervened and introduced Yossi to a Messianic Jewish Leader and a Fellowship of Messianic Jewish Believers in El Paso, Texas.  This was a revelation that forever changed Yossi’s emphasis in his walk with Jesus.  It was exciting to celebrate his faith in a Jewish context.  Yossi could now be Jewish and believe in Yeshua (Jesus), the Jewish Messiah.

The next several years lead Yossi into intense study of the Word of God, Jewish customs and traditions, the Hebrew language, and the Feasts of the Lord.  Eventually, he became an ordained Elder at the Messianic Synagogue in El Paso, Texas, and in 1992, became the Rabbi.

Over the next several years, Yossi attended the Union of Messianic Jewish Congregations (UMJC) Yeshiva Program and the International Alliance of Messianic Congregations and Synagogues (IAMCS) Yeshiva Program and is now an Ordained Messianic Rabbi with the IAMCS. Rabbi Yossi has spoken at several regional and national conferences, as well as, many Churches.  He presently leads Etz Chayim Messianic Synagogue in Lakeland, Florida.

Rabbi Yossi believes, that being a Jewish Believer in Yeshua (Jesus), is a God-given responsibility to share the Good News with the House of Israel and the Church as well.  More than ever, as we approach the End of the Age, the Jewish People need to come to faith in their Jewish Messiah. In addition, the Church must not forget its Jewish roots and must be supportive of Israel and the Jewish people. Together, the wild olive branch and the cultivated branch must grow together in unity and purpose for the Kingdom of God.

Irene Laster was born and raised in the Barrio’s of El Paso, Texas.  Dirt poor, and rejected by her stepfather, she looked for an escape from that life and married very young.  After a failed marriage, she struggled to raise her three boys without any support from their father.  Her anger toward God and men, lead her into a life of drugs, drinking, and immorality.

In her search for answers, she visited different Churches hoping to find God and tell Him off.  However, in 1978 at a nondenominational Church, she not only met God, but the encounter forever changed her life.  Immediately, she began to minister to street people at the El Paso Hotline and gained tremendous experience in healing and deliverance ministry.

As she continued to seek the Lord, Irene was lead to a Messianic Jewish Synagogue in 1981.  This was totally an unfamiliar environment, but somehow she felt at home and knew this was where she belonged.  In 1985, she married Yossi Laster, a Messianic Jew and her calling as a “Ruth” came into being.

Since 1992, Irene has been the Rebbetzin (Rabbi’s Wife) of two different Messianic Synagogues and has uniquely touched the lives of hundreds of people.  She has led many people to the Kingdom of God, seen the Lord deliver and heal scores of people, and has been involved in women’s ministry, children’s ministry, and dance ministries.

Irene truly embodies what it means to be a “Ruth” and has steadfastly supported Messianic Judaism for over three decades.  The Lord has given her many opportunities to share with Jewish People, including Holocaust Survivors and Rabbis.  As a result of her love for the Jewish People and profound insight into the Scriptures, the Lord has used her to bring many of Abraham’s children into the Kingdom.

Irene is also the author of "THROUGH THE EYES OF A GENTILE" which is available for purchase on the "Resources" Page.