On June 7th, 1967, during the Six-Day War, Israeli forces pushed into Jerusalem and recaptured the Temple Mount.  At the Kotel (Western Wall), the last remnant of the walls that once surrounded the ancient Temple, hardened soldiers wept openly in joy.  Others gently embraced the rough stones of the wall.  The Chief Army Rabbi, Schlomo Goren, then performed a very significant act.  He sounded the Shofar.  By blowing the Shofar, he symbolically announced to the world Israel’s return to the home of their forefathers.  This is the prophetic message of Rosh Hashanah — the future return, restoration, or re-gathering of the people of Israel back to the land God has given to them.  The prophet Isaiah spoke of this day: “And in that day a great Shofar will sound.  Those who were perishing in Assyria and those who were exiled in Egypt will come and worship the LORD on the holy mountain in Jerusalem.” (Isaiah 27:13)

In Leviticus 23:24 Rosh Hashanah is known as “Zichron Teruah,” the “Memorial of Blowing Shofars.”  Many believe it is a memorial of God’s grace to Abraham when He substituted a ram to be sacrificed instead of Isaac.  It is also regarded by the Jewish people as a memorial of the creation of the world.  In Numbers 29:1 this day is known as “Yom Teruah,” the “Day of Blowing Shofars.”  To our people, this day is simply known as the “Feast of Trumpets.”

During the month of Elul proceeding Rosh Hashanah, the Shofar is blown every morning in the Synagogue to remind the people that the holy days are approaching, in order that they may prepare themselves.  Interestingly, the shape of the Shofar is curved and bent to remind the people to bend in respect and repentance before God.  The great Rabbi Maimonides wrote:  “Awake from your slumber, and rouse yourselves from your sluggishness.  Scrutinize your deeds and return in repentance.  Remember your Creator, you who forget eternal truth in the trifles of the hour, who go astray after vain illusions that can neither profit nor deliver.  Carefully examine your souls; mend your ways and your actions; forsake the evil path and unworthy purposes.  Return to God, so that He may have mercy upon you.” 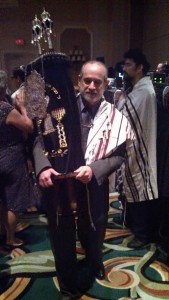